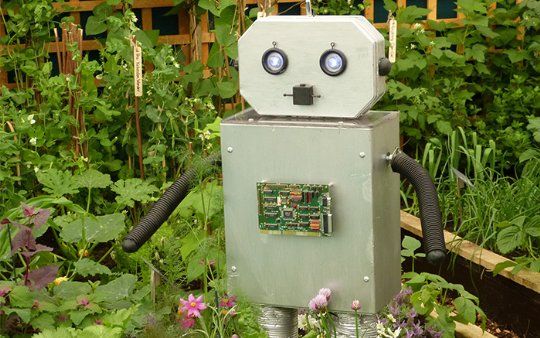 I just finished reading the book “A Robot in the Garden” by Deborah Install, and it was just the novel I needed at this point in my life. I have been on an adventure trying to become more respectful of what I need in life to truly be happy. This has included my therapist talking a lot about my “inner child” and how I need to create an environment where she does not feel the world and the people around her pose a threat.

Thus brings me to my connection to this book.

First, a summary of the novel. It follows a man named Ben who feels like he is failing at everything which is only exacerbated when his wife leaves him. While him and his wife are spending their last days living together, Ben finds a robot in his garden that is very outdated compared to the android machines that exist all around them. Ben takes it upon himself to take an adventure around the world to find out how to fix the little guy who has now identified himself as Tang and acts more like a wide-eyed child than a robot. The adventure takes him from his home in the UK to San Francisco, Houston, Tokyo, Micronesia, and finally back home. While on this adventure he must keep track of Tang and teach him about things that intrigue him, scare him, are familiar but different in some respect, and those that are unique to humans. As Ben becomes Tang’s mentor and protector, he also starts to doubt if he is to be doing this or teaching anyone complexities of human emotions and responsibilities considering his own life is in shambles. Tang though appreciates all of Ben’s time and becomes very secure with him. This connection becomes even stronger after Ben saves him from the man who created him as he wants to keep him to use his technology to build better androids. When Tang and Ben arrive back home, Tang understands Ben misses his wife, and when they run into each other at Christmas, Tang takes it upon himself to help Ben. Ben’s wife ends up having a baby and assumes her and Ben will end up back together since the baby is his. Ben however lets his wife live with him so he can help with the baby, but insists that he must continue to do things for himself before they try again. He explains he must do this because when he was with Tang and felt his wife would not be coming back, he realized he wanted to be a better man for himself and not just to “win his wife back.”

This story speaks volumes to me as I feel like Tang is that inner child of mine, and I am Ben, discovering that I want to better myself and do things that are important and special to me. All the while I continue to make sure my inner child understands they will not be forgotten and I will continue to work to maintain an environment where both of us can thrive.

Lately I have been thinking about Mr. A a lot. For those of you who don’t know, Mr. A is my ex that I spent five years with. Our break-up was amicable, but there were a lot of things said out of emotion that left some scars. However when you spend five years of your life with someone, you don’t just forget about them. Something about him is different, but I am sure there is a lot that is the same as well. This has raged the inner internal battle of whether I want to go visit him or if I should be texting him. However much like Tang does whenever Ben does something he doesn’t understand, Tang will ask “Ben what is this?” or “Ben why?” I feel like my inner child is now feeling safe enough to start asking questions about why and pushes me to continue to do the things that I couldn’t do to find myself when I was younger. So when I was considering cancelling my plans to go play Scrabble to instead have dinner with Mr. A, I heard something in me say “why are you going to do that when you were so excited about going to do this other thing?” My little Tang was right. So I said “Sorry Mr. A I have plans.” I was proud of myself even though I gave in a little and invited him to join me. Honestly I thought it would just make it easier for me to talk to others which is ultimately why I am doing it (social anxiety is the next big obstacle to tackle).

So the moral of the story is I will listen to and truly cherish the little Tang I have inside of me.

This site uses Akismet to reduce spam. Learn how your comment data is processed.

Current Book I Have My Nose In